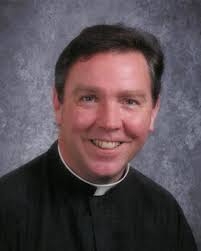 I was raised in the Chicago suburb of River Forest, and was a member of St. Vincent Ferrer Parish.  I am the youngest of five, with three brothers and one sister.  I attended Marmion Academy in Aurora for high school and graduated in 1979.  My first call or invitation from God came at my high school graduation, but it would be many years later before I would answer the call.After high school, I attended and graduated from the Goodman School of Drama at DePaul, and worked in Chicago as an actor for a few years before heading out California.  I lived in LA for a few years pursuing my career, before returning to Illinois on account of my father’s cancer.  After my father’s passing my mother had a massive stroke six months later.

For the next eight years of my life I was my mothers caregiver, and worked at Trattoria #10 in downtown Chicago. This period of my life was when I started to really discern and pray over God’s call and his invitation to serve Him, and my neighbor in a vocation to priesthood.  During this time I taught RCIA for five years, worked with the homeless in PADS, taught Religious Ed, attended prayer groups, and traveled on many pilgrimages to religious shrines.  Yet, most centrally it was in caring for my mother that the Lord used to help teach, strengthen, and guide me toward a priestly vocation.  I learned many things about suffering and grace by becoming a caregiver.In 1998, my brother and his wife and four children built a home in Plainfield and were able and desired to bring my mother to live with them.  This opened the doors for me to pursue God’s calling.  I applied to the Joliet Diocese and was accepted on Oct 7th, the feast of the Rosary.  I began my seminary formation at Conception Seminary in Conception, Missouri in 1999, and graduated in 2001.  After Conception I entered formation at St. Mary of Lake Seminary in Mundelein, and was ordained to the Priesthood of Jesus Christ June 4, 2005, the year of the Eucharist.  My first assignment as a parochial vicar was at St. Petronille in Glen Ellyn.  My second assignment was to St. Mary Immaculate in Plainfield.  In December of 2010, I was assigned to Resurrection in Wayne as a Pastor.

In 2013 I was named Pastor of St. Raphael Parish in Naperville, were I have been blessed to serve for the last seven years.  Our Lord continues to bring new blessings with each passing year, and I am grateful to serve this loving, spirited and faith filled community.